This is probably the “most” adventurous thing I have done with a child in tow! Visiting a fun place on a long layover, as a matter of fact, consciously picked a flight to give me the opportunity to have long enough time to cross something off of my “bucket list”. Amsterdam is a great place to visit, no doubt about it, however, it is just not on my list of places where I want to spend days after days admiring the beauty of it. Rather, it’s on my list of places that I can cross it off by spending least amount of time ( just like I did with Brussels before Eliana was born!), and just enough for me. Keukenhof is a place where spending few hours is enough!

Then came the opportunity to fly through Amsterdam without spending the night and then continue on to my final destination.

In case you didn’t know, long lay over and  stopovers are great options to see a new place without spending tons.  And these stop overs while airlines recently have been advertising a lot, actually has been around for the longest.

So, I bought a ticket from NYC to DUBAI for $683.00 in April. I could have gotten (price checked) a direct flight for the same price on Emirates, but I chose to fly KLM as I wanted to visit Keukenhof! I picked the flights that gave me the longest lay over time in AMS. From NYC to DXB via AMS my lay over was about 7 hours, and on the way back (2 weeks later) was 9 hours ( and I chose to visit Keukenhof on way back to catch the peak bloom time).

Before proceeding to tell the story of Keukenhof, let me tell you briefly about the time spent Amsterdam, city center.

We touched down at 6 a.m. (too early!) and then breezed through immigration (luggage was checked all the way through DXB as it should be), then sat at the diner right around the baggage claim exit area (still inside the airport) and spent about good 2 and half hours there as I ate and Elina slept. It happened to be Elina’s bedtime right at that time! The only downside! After that proceeded to exit, bought train tickets via vending machine and proceeded downstairs to catch the train directly to City. It was quick and easy. At the station, waited at Starbucks for a friend to show up (luckily she brought her kid’s stroller) and then she proceeded to show me around. We walked a lot, then had a really GREAT breakfast and walked some more! She showed me around, explained what is what…then time to be back to the airport. It was really neat! I got to see Anne Frank House (albeit just from outside!) In no time Eliana and I were back at the airport and off to Dubai!

On the way back, plane landed pretty darn early again. Again breezed through the immigration and off to the office which was on the first floor to buy the bus tickets for Keukenhoff. These are special busses that go directly to Keukenhoff. Again, Eliana was severely jet legged and was very sleepy! Poor girl. But mother had to visit Keukenhoff! But she also proved to be her mother’s daughter 😉 Signs were clearly marked for the bus departure point. It was very easy to follow. We did let one bus go since it was packed and I wasn’t going to stand with a child. Next bus came in pretty quick and off we went.

As it was such a SIGHT to see the WINDMILLS! And TULIPS! Oh MY! The scenery couldn’t get any more Dutch! And to compliment the view, weather was just plain GORGEOUS! It was early morning, sun was shining nice and bright, perfect Spring weather. Stars aligned! There are no pictures of that view though as I was too busy to admire the view as the bus was passing by and wasn’t just too interested in taking the pain of getting the camera out of the bag! Live in the moment, anyone?

Timing was perfect as it was early in the day and not crowded, tourists were coming in but wasn’t packed just yet. Proceeded to enter the park, and just these flowers!!! Colors!! Took pictures, took breaks as we walked along cause little adventure girl was bit tired! Then it was time to eat!! Had delicious crepe from this “Cart” inside the park, next to the cafeteria. Then had lunch at the cafeteria. Walked more, admired even more! Oh, by then it was getting full on touristy! Ppl in groups, tours and what not. But we were ahead! As they were entering we were exiting! Thank the Stars!

On the way out dropped by the “gift shop”. Lots of pretty usual stuffs. I collect postcards, so, got few. Busses wait pretty close to the park entrance/exit. And then back to airport to catch return flight back home.

This year, it’s opening on March, 22 till May 13, 2018! If you ever wanted to visit this place, this is your chance till next time! Like cherry blossom, this one also has a peak bloom time, consult the official website to get all the info.

And here are some pictures! Even on a great camera pictures don’t do justice to this place and all these were taken on my then not so well functioning phone, so, there is that! 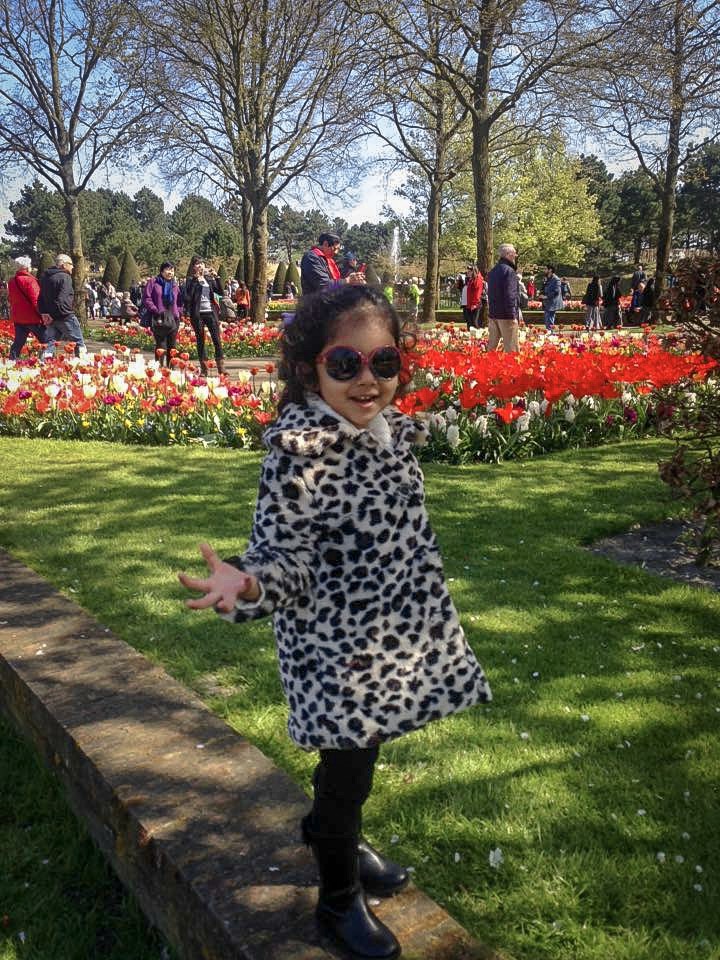 When she was bit tired and needed to sit down! 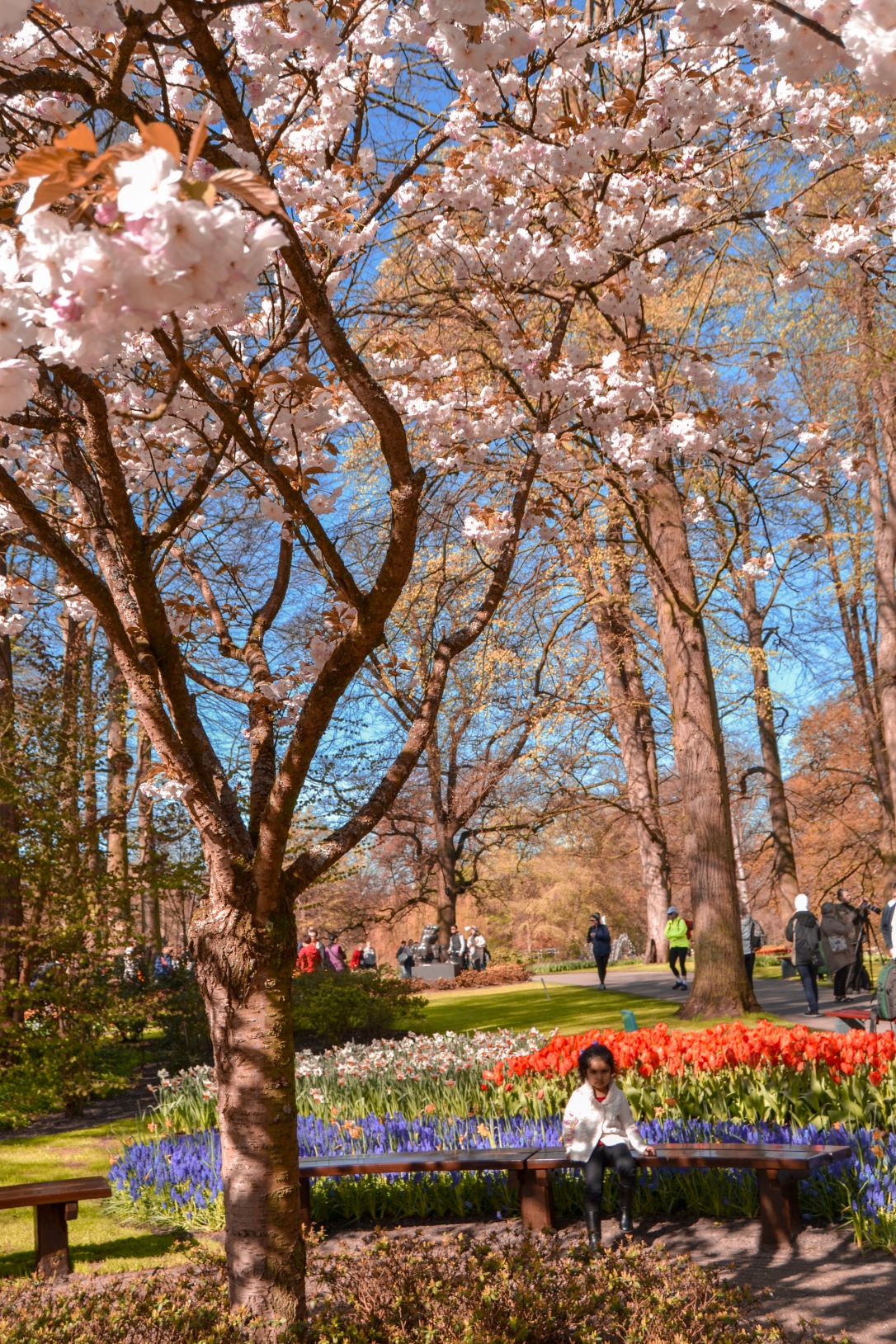 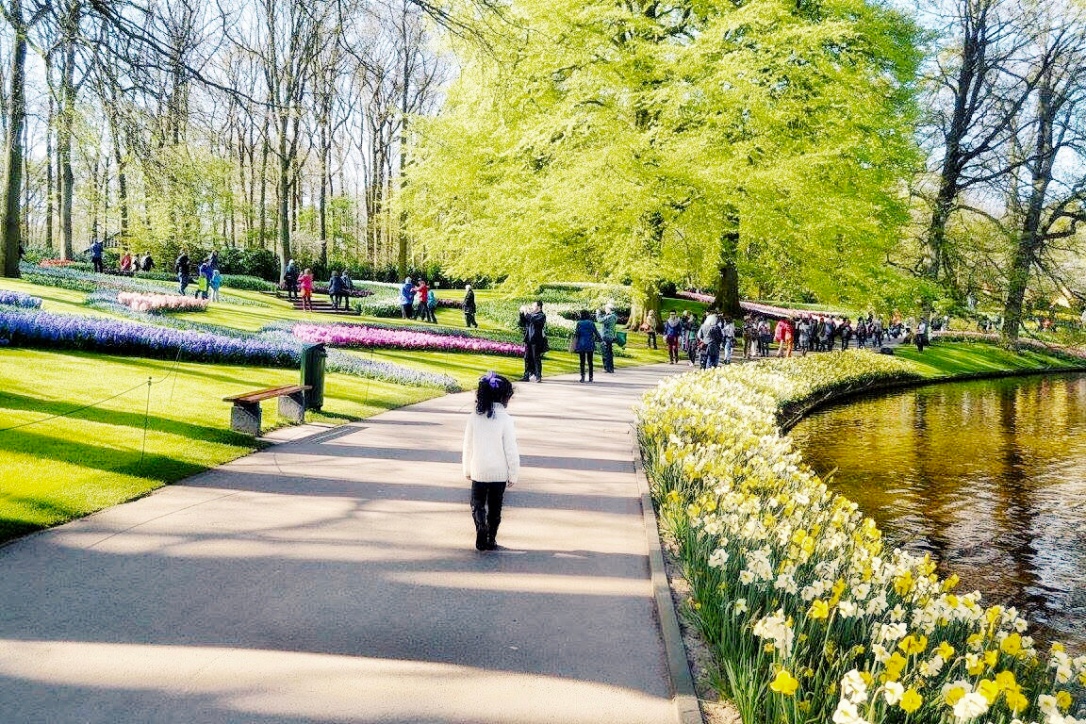 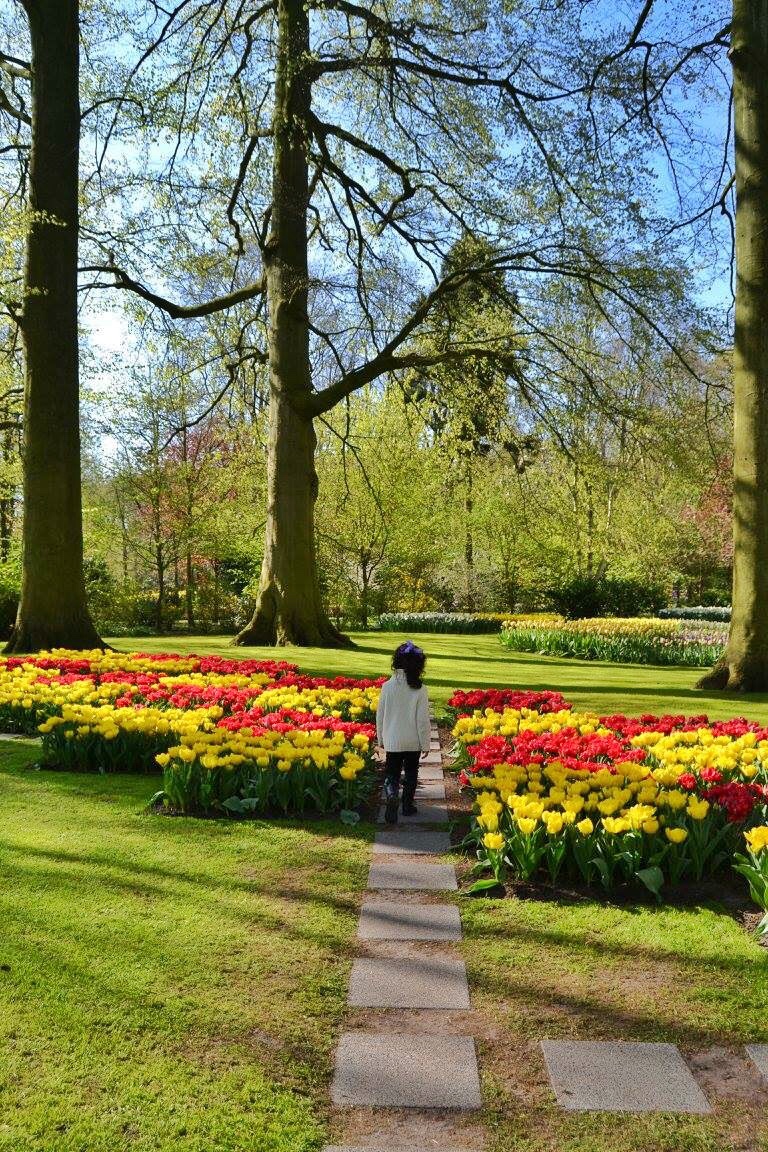 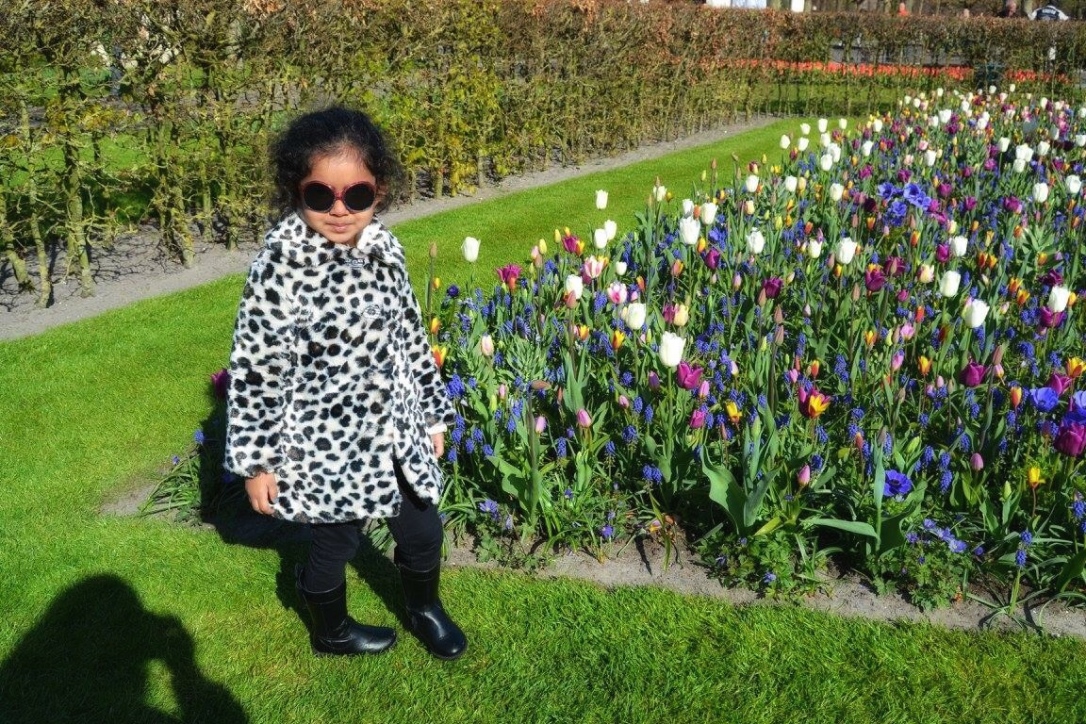 And last but not least as Eliana was taking a picture of me, a sweet lady immediately asked her to stand with me and took the phone from her to snap a picture of us together! Forever grateful! It was very kind of her!

Aren’t we a good team?? 😉 All tired, jet legged and still up for an adventure? 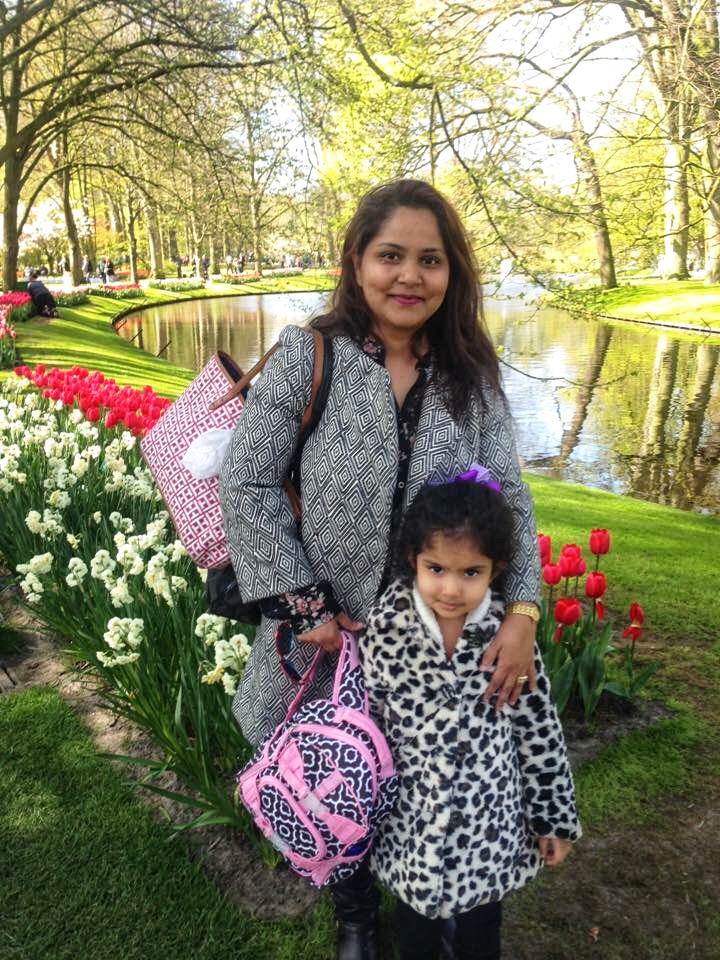 Hope you guys can get to visit this AWESOME place!!! I would definitely revisit, on a layover, of course 😉

View all posts by adventuregirleliana

32 thoughts on “Keukenhof: Adventure on a layover!”